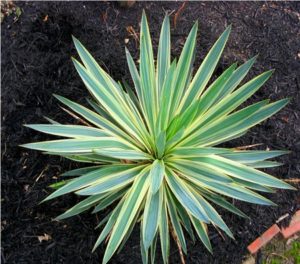 Variegated Spanish Dagger is a dramatic succulent that deserves a spot in drought tolerant gardens. Dark green-blue leaves flanked with creamy gold variegation form a spiky ball. In the spirit of July, we'll call it a foliage firework. In cool weather, the cream edges turn to pink. (A fun note is that this is from stress. Don't you wish stress just turned people pink too?) The foliage will eventually reach 6-8' tall and 4-6' wide, with a trunk after several years of growth. Like most succulents, this yucca is a slow grower. Variegated Spanish Dagger will offset with pups via rhizomes, but makes a stunning container plant if you'd like to maintain a single plant. In summertime, the plant sends out a charming flower spike.  Mauve bracts show until blushed cream flowers emerge in a tower of bells. Unlike some agaves, this yucca is not monocarpic. This means it won't die after flowering just once, instead you'll get blooms every year. 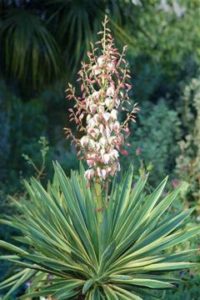 This plant is a great choice in full sun beds that could use some contrast or textural interest. Use it there as an accent, or in a rock garden in mass for high impact. Wherever you place it, make sure to keep it far enough away from pathways and play areas. It's got some spikes you don't want to get in a fight with!

The Variegated Spanish Dagger can handle coastal conditions, drought, deer, and cool nights to  0° F. After planting, give it some time with regular water to establish a deep root system before tapering off to occasional watering.

Will you dare to use Variegated Spanish Dagger in your landscape, or are the spikey leaves too much for your drought tolerant garden?