Controlling ground squirrels can feel like a never-ending task sometimes. Considering that squirrels can give birth to as many as 15 babies each year, and they live an average of three to four years, it is important to be aware of their breeding season, habitat, and the various methods of control available.

In addition to the vast damage to property and landscaping by ground squirrels, they are also carriers of disease and are widely considered a pest. According to the Department of Agriculture, the most common method of transmission of bubonic plague involves the ground squirrel acting as host to plague-infected fleas.

Timing and Methods for Success

As shown in the California Ground Squirrel Calendar of Management from the University of California, below, the best times to control squirrels are at the beginning of their breeding season and during the summer months. If you have a serious problem with ground squirrels, it is very important to concentrate on controlling them during the breeding season to reduce the population and efforts required to control them later in the year. 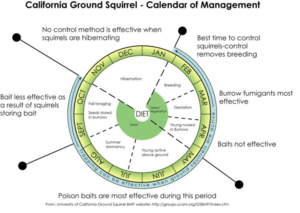 The California ground squirrel’s breeding season runs from February to April. During this time the squirrels are very active and spend long periods above ground, making trapping a possible option. There are various traps and trapping methods available and they are best used when dealing with a small number of squirrels. Ground squirrels may not be live trapped and released without a permit, so kill traps are preferred. Daily monitoring of the traps and disposal is needed, as well as consideration of other animals, pets, children, etc. that may be injured. Always wear proper protection when removing dead squirrels from traps.

During the breeding and gestation period, burrow fumigants are effective as the squirrels are preparing and expanding their burrows for the new babies. The females will spend much of their time underground. The soil is usually moist, which helps retain the fumigation. Baiting during this time is not as effective due to the fact that the squirrels rely on mostly fresh vegetation and are less likely to consume grain baits and the females may not feed regularly.

During the summer months, anticoagulant bait is effective for squirrel control because the squirrels are actively eating and their main source of food during this time is seeds and nuts. They are more likely to eat grain baits. Poison baits have a few cons and should always be used with bait stations to prevent ingestion by other animals. Because squirrels usually stay within 100 feet of their burrows, placing the bait stations close around their burrow increases the likelihood of success. You can usually expect to spend two to four weeks checking and refilling bait stations daily as the squirrel must consume the bait over a period of several days.

During the colder months, squirrels may hibernate and control methods are less effective. Due to slow respiration, they may not inhale fatal doses of the fumigation and may also plug off their nest. Squirrels remaining above ground are feeding on vegetation and may not consume grain baits.

Always read fumigation and bait directions carefully and check with your local pesticide or agriculture department and Fish and Wildlife Service to determine if there are any restrictions on use and know your target. In California, while you may legally control ground squirrels as necessary, tree squirrels are considered game animals and may not be poisoned. There may also be endangered or protected animals in your area vulnerable to bait or fumigation, such as kangaroo rats or San Joaquin kit fox. If you use shooting as a control technique, it is important to use non-lead ammunition due to the presence of the California Condor.

After reducing the population, it is important to destroy the burrows as squirrels, and sometimes other animals, will move into vacant burrows. Keeping your yard clear of debris and brush makes it less desirable and helps detect them. It is best to take action as soon as ground squirrels are spotted, before the population grows.

If you need help controlling your ground squirrel population, we highly recommend Chris at Caddie Shack. He is licensed to use restricted-use pesticides and also offers more humane and chemical-free control methods.

Visit our Amazon recommendations page to see which products we use and recommend for squirrels and other pests: https://www.amazon.com/shop/allseasonsgardening